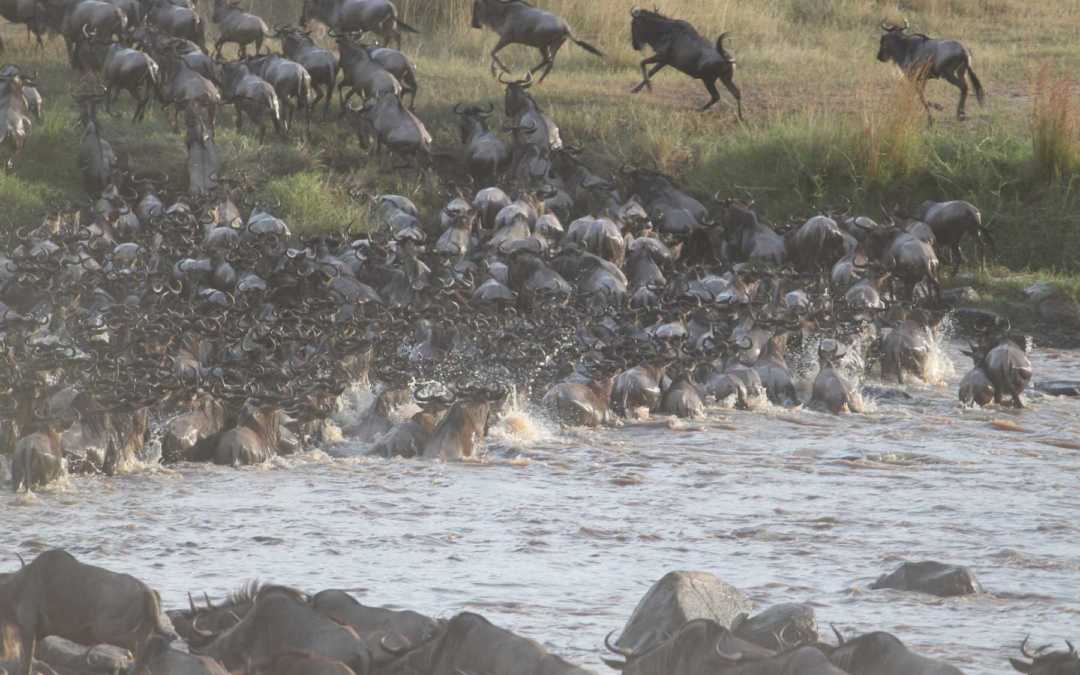 The seasonal great wildebeest migration safari in Tanzania is one of the main travel reasons to fall in love with the African wildlife- and indeed drawing millions of visitors to the East African region.

A large number of zebras, wildebeest and antelope populations moving around the superb and vast plains of the East African Region in search of better pasture. The movement is also known as the great Serengeti wildebeest migration. It is a life-time journey attracting worldwide travelers to Tanzania, undeniably included on the Africa safari bucket list of every wildlife safari addict. The non-small lifetime safari experience allows tourists of all ages to witness the beauty our planet holds, making Tanzania wildebeest migration safari of one of the things to do when considering a trip to Africa.

The spectacle is obviously amazing but planning it can be relatively challenging and a few key details for a successful experience will be noted and explained in this article. Choosing the right time and place is the key and that depends on the seasons, precisely the rainfall patterns in Kenya and Tanzania.

The wildebeest migration map dependent upon months is explained as follows.

November marks the start of the short rainy season and this goes on until December, and Serengeti receives herds of the wildebeest migration, seizing the relatively short grasslands of the park. These are the areas of South and East of Seronera, around Ndutu and the northern part of Serengeti, Ngorongoro Conservation area. The herds of Wildebeest and zebra spread everywhere around these grasslands and they stay there throughout January to March feeding on nutritious grasses. Around April, the migration will move to the northern part of the park and among the herds are the newly born in February.

What is the great wildebeest migration

Around two million wildebeest, zebra, and antelope, from young to adults, a crowd in the pursue of green pasture and begin a long journey from Tanzania’s Serengeti National Park to Kenya’s Masai Mara National Reserve. The non-risk-free long journey assembles herds in their great numbers to cross rivers like Grumeti and Mara between Tanzania and Kenya. This journey is indeed risky given that some of the herds encounter crocodiles killing them during the river crossings. The great wildebeest migration undeniably offers a lifetime experience with African wildlife. It is one of the most rewarding trips any wildlife photography enthusiast would be willing to be part of.

The migration experience is indescribable, beholding the crowd in thousands of wildebeest, zebra, gazelle, among others is just as exciting as nobody could imagine. The superb safari experience is polished by the presence of lions, leopards, cheetahs, hyenas and wild dogs making the Tanzania Safari exquisite in both aspects.

December-March: This time of the year sees herds crowding around Serengeti and Ngorongoro areas in the Northern parts of Tanzania in search of green pastures products of the rainfall. This can be an exciting opportunity to see babies born during these months in addition to the adults. The plains of Ndutu and Salei offer a perfect chance to spot these herds.

April – May: Migration to North and West begins at this time of the year in search of green pastures of the Serengeti National Park. Due to heavy rains, it seems difficult to follow the migration of the herds and road conditions cause many tour operators and safari camps to wait for the perfect time, a two-month gap.

June: At this time of the year, the rain has stopped, and this is a perfect moment to see the wildebeest and zebra that had moved from the south to the northern area. A large congregation is amazingly attracting lots of visitors as the migration spreads out. This one of the perfect moments for the great wildebeest migration safari.

July:  As early discussed, the migration journey is non-risk-free particularly when it comes to the river crossing. Grumeti River is deep in some areas and it all depends on the quantity of the rain it had received. The Grumeti having abundant waters makes difficult for the herds to cross the river, some being stuck in the rivers and end become food to crocodiles. All camps that had closed during the tough rainy months of April and May re-open and this is undoubtedly an incredible time for an exquisite safari experience.

January- March Escapes: That escape gives access to the incredible wildlife spots, an opportunity to watch the flamingo lined at the shores of Lake Manyara and vast savannah of the central and southeast parts Serengeti and Ngorongoro Crater, a unique eco-system. The Highlight is the opportunity to witness the massive herds of the wildebeest migration in the Ndutu plains-Southeast Serengeti and Ngorongoro. If the timing is right, you may also witness the calving season in February and March.

July-October Escapes: The escape takes you to the amazing wildlife spots, among them are the Elephant and the Baobab Kingdom -Tarangire National Park, the unique eco-system of Ngorongoro Crater and the vast savannahs of Serengeti ecosystem with its magical Mara River in northern Serengeti.  The highlight is a chance to witness immense herds of the wildebeest migration in the northern tip of Serengeti and along Mara River. Should the timing be just right, you may even see wildebeest crossing Mara River.

June, November-December Escapes: This escape is designed to give a great opportunity to enjoy fauna and flora in Northern Tanzania National Parks, namely Tarangire National Park, the flamingo-lined shores of Lake Manyara, the unique eco-system of Ngorongoro Crater and the vast savannahs Serengeti National Park.

The highlight is a chance to witness part of the Great Wildebeest Migration between Central and western Serengeti.

At Augustine Tours: -Quality and service go hand-in-hand -We have friendly and knowledgeable staff -We have a local expertise that we happily share -We help Save time and effort -You can request tailor-made holidays -We do our best to respond to emails as soon as possible during our regular office hours Mo-Fri 09:00am-5pm.